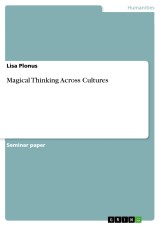 Seminar paper from the year 2022 in the subject Psychology - Miscellaneous, grade: 1,3, University of Applied Sciences Hamm-Lippstadt, language: English, abstract: In the past decades, much research has been conducted on the topic of magical thinking. Nevertheless, it is a rather poorly discovered topic. The construct is applied in various research areas and can help to describe the behavior of people. To better understand magical thinking within the framework of cross-cultural psychology, the concept is defined, and the relation to culture and reasons for magical thinking are explained in the following work. By means of a qualitative study with German students, the concept is examined in more detail with the aim to highlight commonalities as well as differences to existing literature. Finally, the results are interpreted and related to culture, cognition, and consumer behavior.