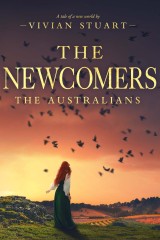 The fourth book in the dramatic and intriguing story about the colonisation of Australia: a country built on blood, passion, and dreams.

The battle continues in the new British colony of Australia: the fight for power as well as survival. The corrupt military officers are doing everything they can to gain legal and political power, while the governor is finding it difficult to carry out his duties.
And Jenny Taggart, now freed from her convict status, is fighting hard for her family, her redemption, and her new country.

Rebels and outcasts, they fled halfway across the earth to settle the harsh Australian wastelands. Decades later — ennobled by love and strengthened by tragedy — they had transformed a wilderness into a fertile land. And themselves into The Australians.

Vivian Stuart was a British writer and during her writing career she had more than 70 books published in Australia, USA and the UK.
Born in Berkshire in England, she spent most of her youth in Burma and India, and later lived in Hungary and Australia. At the age of thirty-five she began to write romantic fiction but soon devoted her attention to military and historical novels.
The Australians series was her most ambitious venture. Originally envisaged as a series of six books, it was extended to many more by popular demand.